Beijing - the capital of China

Beijing is the capital of the most populous country in the world, the People's Republic of China, and it is also the second largest city after Shanghai. Beijing literally means ‘Northern Capital’ and it has been an integral part of China’s history for centuries. Its history dates back several thousand years but it gained importance after it was made the capital of the State of Yan and named Yanjing. Yan was one of the major kingdoms of the Warring States Period, some 2,000 years ago.

Beijing played host to the 2008 Summer Olympic Games and in the past 20 years, the capital has rapidly developed in all ways. Now Beijing is a modern metropolis with charm of an ancient city in the East.

Beijing's climate is a monsoon influenced continental climate with hot, humid summers and cold, dry winters. The best time to visit is September to October, when the capital looks lovely in its golden autumn colours.

Being one of the most popular travel destinations in China, Beijing has a lot to offer. It not only has countless ancient palaces, imperial gardens, altars, temples, tombs and other historical and cultural sites, but also many picturesque natural scenic spots, elegant gardens and beautiful landscapes. There is scarcely a major building of any age in Beijing that doesn't have at least some national historical significance. There is the Forbidden City, Temple of Heaven, Summer Palace and Tiananmen square to name just a handful.

Major attractions in Beijing
Tiananmen Square is the world’s largest city square (440,000 m² - 880 metres by 500 metres) lying in the centre of Beijing. It is named after the Tiananmen Gate (translated as Gate of Heavenly Peace) and it is located to its north, separating it from the Forbidden City. It has great cultural significance as it was the site of several important events in Chinese history. These include the proclamation of the People's Republic of China by Mao Zedong on October 1, 1949; the 1984 military parade for the 35th anniversary of the People's Republic of China, the 50th anniversary in 1999, and the 60th anniversary in 2009; the Tiananmen Square protests in 1976 after the death of premier Zhou Enlai; and the Tiananmen Square Protests of 1989.

Tiananmen Square hosts two monuments - the 38-meter high Monument to the People's Heroes, and the Mausoleum of Mao Zedong. Originally Mao had wished to be cremated, but his body was embalmed, and the construction of a mausoleum began shortly after his death in 1976. People throughout China designed and built the mausoleum - material from all over China was used for the construction and people from all over China volunteered to build it.

The square lies between two ancient, massive gates: Tiananmen to the north and the Zhengyangmen, better known as Qianmen, to the south. Along the west side of the Square is the Great Hall of the People. Along the east side is the National Museum of China (dedicated to Chinese history predating 1919).

The Forbidden City was the former imperial palace which was the home to twenty-four Chinese emperors over 491 years between 1420 and 1911. The Palace Museum is often called the Forbidden City, because it was off-limits to most of the world for 500 years. Nobody, except members of Imperial court, was allowed inside. Listed by UNESCO as a World Cultural Heritage Site in 1987, the Palace Museum is now one of the most popular tourist attractions worldwide. The Forbidden City is the world's largest surviving palace complex and is one of the best preserved in China. It is a must-see.

The common English name, "the Forbidden City", is a translation of the Chinese name Zijin Cheng literally meaning “Purple Forbidden City”. The "Zijin Cheng" has many meanings. Zi, or "Purple", refers to the North Star, which in traditional Chinese astrology was the abode of the Celestial Emperor. The surrounding celestial region, the Stars Enclosure was the realm of the Celestial Emperor and his family. The Forbidden City, as the residence of the terrestrial emperor, was its earthly counterpart. Jin, or "Forbidden", referred to the fact that no one could enter or leave the palace without the emperor's permission. ‘Cheng’ means ‘walled city.’

Yellow is the symbol of the royal family, and it is the dominant colour in the Forbidden City. Roofs are built with yellow glazed tiles; decorations in the palace are painted yellow; even the bricks on the ground are created yellow by a special process.

Temple of Heaven is a complex of Taoist buildings situated in the south-eastern part of central Beijing. This is a really stunning site with wonderful temples and altars. The complex was visited by the Emperors of the Ming and Qing dynasties for annual ceremonies of prayer to Heaven for good harvest.

In ancient China, the Emperor of China was regarded as the Son of Heaven, who administered earthly matters on behalf of the heavenly authority. It was very important to show respect to the Heaven authority. The temple was built for these ceremonies, which were mainly prayers for good harvests.

Twice a year the Emperor would move from the Forbidden City through Beijing to encamp within the complex, wearing special robes and abstaining from eating meat. No ordinary Chinese was allowed to view this procession or the following ceremony. In the temple complex the Emperor would personally pray to Heaven for good harvests. The highpoint of the ceremony was the winter solstice which was performed by the Emperor on the Earthly Mount.

All the buildings within the Temple have special dark blue roof tiles, representing Heaven.

The Great Wall of China is a series of stone and earthen fortifications in northern China, built originally to protect the northern borders of the Chinese Empire against intrusions by various nomadic groups. Several walls have been built since the 5th century BC that are referred to collectively as the Great Wall, which has been rebuilt and maintained from the 5th century BC through the 16th century. One of the most famous is the wall built between 220–206 BC by the first Emperor of China, Qin Shi Huang. Little of that wall remains; the majority of the existing wall was built during the Ming Dynasty.

There are several sections of the UNESCO World Heritage Site Great Wall of China located in the close to Beijing, most notably Badaling, Jinshanling, Simatai and Mutianyu.

Juyongguan or Juyong Pass is located in an 18 kilometer-long Guangou valley approx. 50 kilometres from Beijing City. It is one of the three greatest passes of the Great Wall of China. The other two are Jiayuguan and Shanhaiguan. 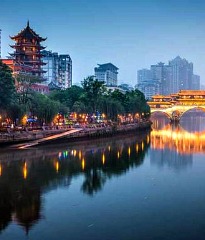 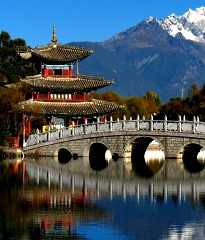